– by Mentor Robin and Trainee Agathe 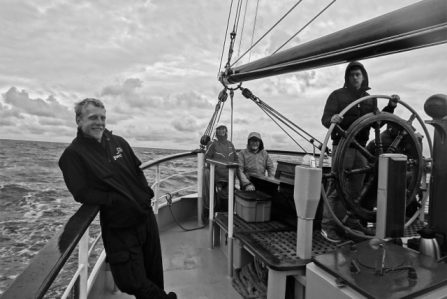 I participated as a mentor to the Three Festivals Tall Ships Regatta 2018 from Dublin to Bordeaux on board the Morgenster. I was assigned to the red watch which was on deck from 8 to 12 – both in the morning and in the evening. The ship was at its maximum capacity, 44 people including trainees and crew members. The majority of the trainees were French, which implied an important work of translations and explanations for me! Apart from the French, the trainees also included one Irish, one Swedish and one Norwegian. The day after we embarked, we received basic training such as how to pull a rope and belay it around a pin, or climbing on the masts.

Two days after we left Dublin, we cast anchor in a small bay nearby Kylemore, in County Waterford. This was the last time we were stepping on land until Bordeaux!

The first days were surprisingly calm. Off the coast of Ireland all of us were expecting strong winds and a rough sea. However, the situation went the exact opposite way. For a couple of days, the sea was flat and the weather sunny and hot. We lacked winds so much that we literally abandoned steering as the ship was only slowly drifting away. As none of us had very much work to do, the second mate gave us a small class about the basics of sailing and how the ropes of the ships work. He explained the difference between square and triangular rigging and how the wind was reacting to it. The good thing about this open-air class was the way the second mate managed to explain complex information by using a light and sometimes humoristic tone. 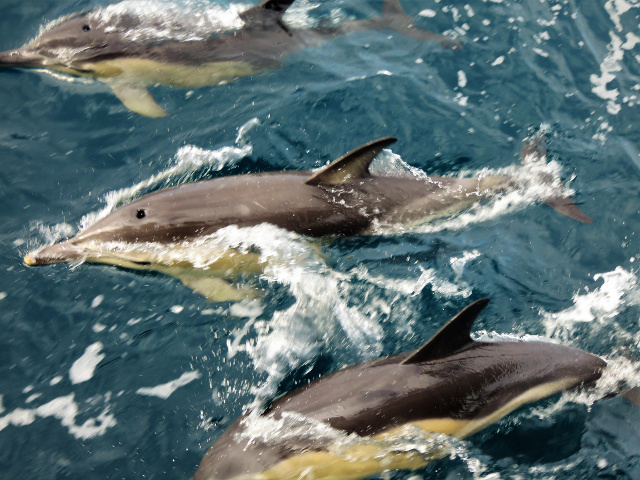 In the next days fortunately the wind became stronger again, and all our sails could finally be put into use! We literally set every sail we could, from the jibs to the spanker, not to mention the staysails and stunsails. At that time we also saw dolphins! In the beginning, it was only a couple of them jumping here and there near the ship but after a few hours, we probably saw dozens of them! As they kept on following the ship for a day and a half, we managed both to take good pictures of them and enjoy their presence while on watch.

While we were in the middle of the sea, between the South of England and Brittany, our ship exceeded the speed of 13 knots. Several factors could explain why we managed to gain so much speed. First of all, the Morgenster is much lighter than other ships such as the Belem and had a draught fewer than 3 meters. Secondly, we were benefiting from crosswinds which were ideal for our square rigging as every inch of sail could be used to its maximum capacity. Finally, after a few days of practice all of the participants were well-trained and perfectly able to perform swift manoeuvres such as tacking or bracing. At one point we were going so fast, and the tension on the sails was so high that the captain decided to take down both royals and top gallants. Even so, we really had the feeling that the ship was flying over the water! Only a few hours before entering the Gironde estuary, we faced a very heavy rain. Unfortunately for us, it was at the exact same moment we were packing the sails! It felt like the sky had cautiously filled up entire tanks of water since the beginning of the race just to pour it on our heads at this moment! Everybody on the deck was completely soaked with water and the ones who weren’t on watch went for cover as fast as they could!

The rain calmed down during the next days as we were sailing up the Garonne River. Despite the fact that the race was over and all the ships, including ours, were using their engines, we decided to put our sails into use again. Luckily we were using our engines because sailing up this river would have been a real nightmare. The water was muddy due to the heavy rain of the last days, and large pieces of wood were floating on the surface. Moreover, the wind was coming directly from the front which made sailing even more difficult. Apart from those participating in the Regatta, we also saw other sailing ships on their way to Bordeaux such as the Etoile du Roy. As the other ships had more powerful engines and were moving faster than us, it was always impressive to see them coming by us!

After a few hours, our ship finally docked on the quay of Bordeaux and even if we were happy to be there, we all felt a bit sad to realise that the end of the trip was near! 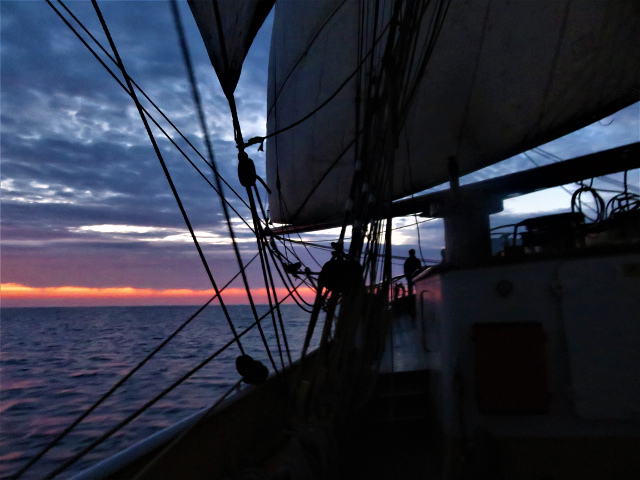 Morgenster at sea by Robin Gatel

I participated in the Tall Ship Regatta 2018 and I was on the Morgenster.

This experience was very interesting and also very surprising. I learnt a lot about the ships generally but particularly about the Morgenster, of course. I learned how to arrange the ropes, how to write and find our position on the sea. I also learned the expressions and terms of the boat.

This Regatta was obviously a human adventure because you learn how to live on the ship (living in community, for example); you meet people from different countries (speaking English is very important) and of different ages. It’s a very rewarding experience.

There is unfortunately some negative points! For my part, I suffered from sea sickness. This is not very pleasant but it does not last long.

If I had to start again, I would do the same things because I had the opportunity to do amazing things, such as admire the ocean from the top of the mast or to see dolphins!

I hope I can start a trip like this again!

[Featured picture in black and white by Laura Persillon]