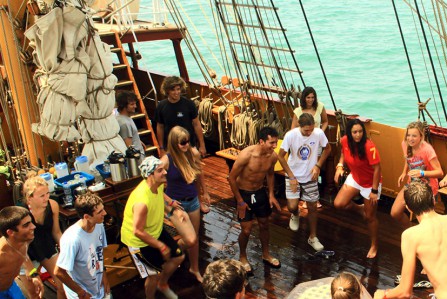 “There were dolphins!”, my watch mate told me when I emerged from my cabin. “Hundreds of them! Jumping and blowing! You missed them!” I thought he was pulling my leg, but apparently he wasn’t. When seasickness claims you, you miss a lot. Actually, I would have gotten up if my watch mates hadn’t chosen not to disturb me, possibly for fear I might bite their heads off with my mood. This morning, they did wake me, but not until we were an hour into our watch, the sails had been set and the engine turned off at last, giving us a few moments of peace. Before the wind calmed and it became almost time to take down the sails again, it was breakfast time. (It may surprise you to learn that in Minnesota, we have a popular breakfast chain, Pannekoeken Huis, entirely devoted to this Dutch specialty. We can’t get enough!) I have also not yet seen the Southern Cross.

However, when I worry I’ve missed out on the fun, everybody is quick to reassure me that there is more fun to come. It’s not like there’s any hurry – we have nearly two months to come to get to know the ship and each other. I sincerely hope the dolphins will be back, too.
Those on board seem to be divided into two groups: those whose names I can’t remember, and those whose names I can remember but can’t spell. I only know Lotte’s because we met on Facebook before the trip. The official language on board is English, which is important for those few lonely souls among us who don’t speak Dutch. However, there are many on board that seem to lapse into their native language naturally, and that leaves me, plus an Englishman and a Basque, who always seem to get left out of the best jokes.

Plus, when anything not so nice happens, it helps to remember that it’s good material for my upcoming book. If the journals I keep are detailed enough, half the work will be done by the time I get back. For now, I’ve beaten seasickness only to come down with a cold, but past experience has taught me this is inevitable while living in such close proximity to others. Some honey lozenges were enough to soothe my sore throat and keep me going. My roommate, Lotte, has not been so lucky; seasickness continues to keep her in our cabin.
In the nail-biting weeks leading up to the voyage, I tried and tried to get someone at the ship’s office to tell me specifically what our ports of call might be. I couldn’t get a straight answer. It seems it depends on the weather and a million other factors. The uncertainty killed me. But very little is certain on the ocean, which is why it’s important for me to experience a trip like this. I fear the unknown more than just about anything else. But that’s why I chose to do it; to get comfortable with being uncomfortable, as they say.

But now that mystery, at least, is cleared up. Soon we will be among the elect few who have visited the Falkland Islands. The 1982 conflict there seems a distant memory for most of the world, but ‘Las Malvinas’ are still very much a point of contention in Argentina. They’re also our best chance of spotting penguins before we enter the lower latitudes. It will also provide a welcome respite before we enter the greatest and longest part of our journey (plus a chance, as the sailors warn me, for them to get a little crazy, which I’m looking forward to recording for posterity. Consider this your warning, guys!) By then, with any luck, the uncomfortable will have started to seem very comfortable.”