On the Right Course 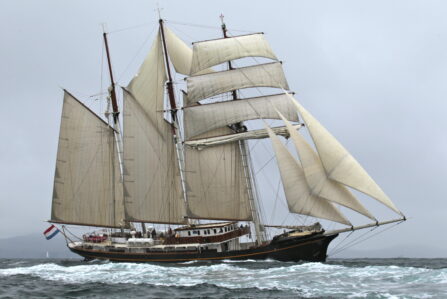 Today we have started hauling a smaller vessel, Peter von Danzig – we are currently expecting to go on motor for 2 days before the race will resume. The evening was much calmer than yesterday because everyone have by now gotten over their seasickness – even those people who just 24 hours ago swore that they want to go home were in great spirits today!

The race has been postponed until we get some better winds. Because of that we’ve spent half a day taking down the sails and furling them nicely. It made for good Sail Training opportunity – when the race finally starts again we will be all the more prepared! The watch groups are large – 15 trainees each – and so most of the tasks can be completed within watches. Of course it’s slower, but right now we’re not in a hurry.

The second day at sea is barely finished but everybody feels right at home on board the Gulden Leeuw.

The third of August was a singing day on board the Gulden Leeuw. It has started with the dolphins swimming along the Ship – and some trainees calling them to us (surprisingly successfully!) by imitating their songs. The happy hour followed with the usual soundtrack, which hasn’t stopped even after the Ship was sparkling clean again. Trainees could be heard singing everywhere, from the net under the bowsprit all the way to the aft, where a lookout was posted to mind our friends from Peter von Danzig.

Finally, the day concluded with a proper Shanty Evening, during which Peter has taught us some working songs – South Australia seemed to be the favourite with the group. We were able to put them to practice the next day while hoisting the main sail.

The slower moments of the watches are spent learning the theory of sailing, where different lines are located on deck and what they do, and how to tie some very useful knots.

Somewhere in the afternoon on the 4th we’ve said goodbye to Peter von Danzig. Soon after that we were ready to set some sails again and, even though with a little help from the motor still, we have finally resumed sailing!

Now we’re ready to start the race, which we plan to do sometime today. Everyone’s excited to see what the following weeks will bring.

On the Right Track

Yesterday we celebrated Sunday by trying to be lazy. Everybody who’s ever sailed on a Tall Ship knows that the concept of being lazy does not exactly apply though. Just like the cook has to prepare the food, the watches have to sail. And sail we do!

The winds have finally started to change and by now we are more or less on the right course. We’ve done some trimming and at some point we’ve reached the speed of 8 knots! This was quite exciting, considering the slow start of the journey.

Today we are also changing the time – one of the nuances of sailing across the ocean is that you cross different time zones. On this voyage, from west to east, we will be losing a total of 5 hours. Today after dinner we lost the first one when 20:00 became 21:00. In the next few days we should also be changing the watch hours, so that all of the trainees can experience working at different times.

We’ve been heeling on the port side for a day now and people are starting to adjust. Changing the tack will take some getting used to once again. Well, we wouldn’t want it to become boring!

Foggy Days on the Atlantic

Yesterday a lot of heeling brought back some seasickness. Most people haven’t slept so well and everybody but the 0800 watch have started to skip breakfast. It was quite cold, with slight drizzle and lots of fog. To make the sorrow complete, the coffee maker decided it didn’t like the heeling either and gave out just before breakfast.

Thankfully the day got a bit brighter as the time went on, we even got some sunshine there by the end! In the evening Alejandro gave us a presentation about dolphins and whales which we might see along the way. What better way to finish a cold and busy day.

Today the spirits have lifted a lot. We’ve sailed a decent distance in the night. That news, along with beautiful sunshine, greeted us at breakfast – as well as some long-awaited coffee. As the day went on, a thick fog came upon us, covering most of the world in milky whiteness.

The murder game starts tonight. We’ve distributed little pieces of paper among trainees and crew. Everyone got a name, a place on the Ship and a “murder weapon” which they will use to eliminate their target. One person has to make another hold a sleeping bag next to the bosun’s locker – that’s going to prove interesting for sure.

We are well on the way now and you can feel it in the air. The trainees are getting more and more responsibilities from leading small manoeuvres on their own to choosing a cleaning master for each day for happy hour. We have sailed more than 1,100 nautical miles. We are learning more about each other and changing our routines to facilitate the differences.

The differences are starting to show; some people come closer together, some drift apart. That’s life, and group dynamics – you cannot avoid problems in such a large group. I think though that we are dealing with them quite nicely and everyone is scheduled to arrive in Le Havre very happy.

Happy thoughts are being transmitted through the “Happy Box”. The red tin can is getting full. Every day there are fresh nice thoughts in there: thoughts of support and thankfulness. Earnest, honest, sometimes funny little messages to trainees, crew members and the watches.

The watches have changed their shifts; since we’re here for more than three weeks, everybody gets to try three different working times. We’ve also changed the time again, which means we are now only one hour before the Greenwich Time. We are also almost halfway on our way, which means that from now on time will probably go much faster (surely advanced physics could explain this phenomenon!) We expect to be in port in about two weeks and some trainees are already looking forward to seeing land. So far though there’s nothing but the horizon 360º, with an occasional vessel appearing for an hour or two, before they seemingly slip off the face of the Earth again – like the beautiful Blue Clipper just this morning.

Yesterday was absolutely crazy – I loved it! I was on galley duty, together with the mentors of the group we have on board. We missed most of the fun out on deck. Below deck was a pretty exciting place to be nonetheless.

The day started rainy and windy, with heavy heeling to the port side. By afternoon the rolling movements followed, making trainees and crew alike feel from slightly queasy to totally sick. The watches would stay mostly inside, with only the necessary people on duty, changing every half an hour.

In the galley everything was flying. A mess on the floor welcomed us as we opened the door, and it only got worse from that point. One person got hurt by flying carrots in a hilarious yet slightly painful incident. We’ve found out that as long as you stay focused on a given task, the seasickness stays at bay, even below deck. Coming up the stairs with hot dishes overflowing with – miraculously – delicious food was the most difficult part, though washing the dishes while all the time heeling to one side proved almost an extreme sport as well.

Somehow during the day all the meals got served on time, we even baked a sweet bread for a 4 o’clock snack. I couldn’t help but admire our Cook’s dedication to smoking when he would regularly go out in the foul weather to “relax”, coming back soaking wet but – supposedly – happy.

Through all that we have sailed quite fast, doing about 10 knots most of the time. By 07:45 we have travelled 215 nautical miles in the 24 hour span.

Today the rolling and heeling persists but the sun has finally come out. Some people continue to be queasy, most of us are quite tired. Our mizzen sail is still reefed, the flying jib had to be taken down yesterday as it got a brand new hole, and the forestaysail actually got ripped into pieces. Still, we sail on, and we can now almost see the shores of Ireland and the finishing line of the race. We expect to reach it in the next two or three days. That should give us enough time to stop in one port before we reach our destination in Le Havre. I wonder where that will be…