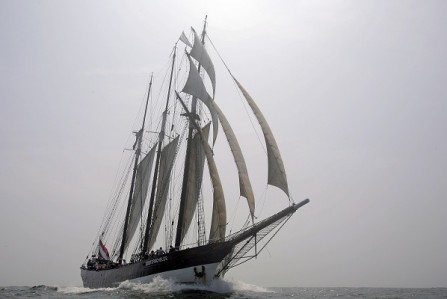 In a way we’re having bad luck: the English Channel is an area with a lot of traffic. Unfortunately we cannot see it. On our last day at sea the temperature dropped till 7 degrees (above zero, fortunately) and the visibility is not more than one mile. It isn’t very pleasant to stay on deck for a longer period of time. On deck you only see people who have to be there: there’s work to be done, for a smoke or a short moment of getting some (very) fresh air. In the wheelhouse the captain or first mate is busy navigating, while some trainees on watch are present. Sometimes the watch set one or two sails, to drop them later on. This way we are somewhat active during our last days at sea.

This easy-going life at sea gives the opportunity to look back at our voyage. We did the trip in two long parts. In both parts we could sail at first, to end them using the engine. During the first part to the Azores the temperature was very pleasant, giving the trainees the opportunity to get used to the life at sea. After we left the Azores the temperature dropped slowly, till the 7 degrees today. So we had long periods at sea, with nothing more to do than sailing this ship during watches and look at the sea. And that’s what I, and many of the trainees, boarded the Oosterschelde for. At the end remains a successful journey.

Find your own sailing adventure below: