NEW PRICES * Guinness to Whisky. This week-long voyage on board of the Blue Clipper will take you from the capital of Ireland to Ullapool in the Scottish Highlands. Weather permitting you will have the chance to visit some remote islands along the way. Perfect trip for a short sailing vacation in the spring! Guest places open to Windseekers of all ages, minimum age 15 years. Places in luxury cabins available for € 2.400 p.p. For more information please enquire at info@windseeker.org

Dublin is the capital and largest city of Ireland. It is located on the east coast, at the mouth of the River Liffey. Founded as a Viking settlement, the Kingdom of Dublin became Ireland's main city. The city has many landmarks and monuments dating back hundreds of years that you can visit. Walk through one of the many parks Dublin offers; it has more green spaces per square kilometer than any other European capital city. Try a Guiness in an Irish pub, brewed in Dublin since 1759. Cheers!

Ullapool, despite its small size is the largest settlement for many miles around and a major tourist destination of Scotland. The village was founded in 1788 as a herring port by the British Fisheries Society. A few Cordyline australis or New Zealand cabbage trees are grown in the town and are often mistaken for palms. The harbour is still the edge of the village, used as a fishing port, yachting haven, and ferry port. Enjoy the beautiful surroundings here. 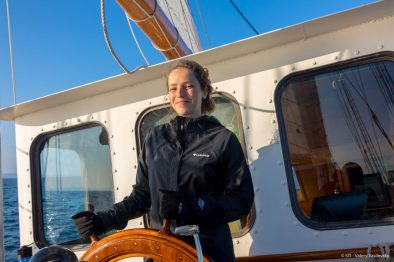 You sail on the Blue Clipper

Tall Ship Blue Clipper is a spacious and luxuriously furnished three masted Topsail Schooner.  In the construction of the hull, modern elements are mixed with traditional ones, such as a clipper bow, an elegant yacht stern and a long ballast …