Follow the sun from France to the beautiful Canary Islands. Sail the Eendracht in the 15-day voyage in which you will make many miles and chase the summer! Two weeks of sailing on the Atlantic Ocean with a sub-tropical destination in mind. Open for all Windseekers, minimum age 15 years. You’ll be sleeping in 4-person cabins. Places in double cabins available for a surcharge of 19,50 euro p.p. per night.

Las Palmas de Gran Canaria is a cosmopolitan town, the shared capital (with Santa Cruz) of the Canary Islands. Situated on the ‘wet’ north side, the city feels more authentic than the touristy places on the ‘dry’ south side. Las Palmas offers beaches, cheap shopping, culture and excitement with a night life, primarily in the district of Vegueta. Its culture is decidedly Spanish, mixed with influences from all over the world, as Las Palmas’ port has been in operation for centuries. 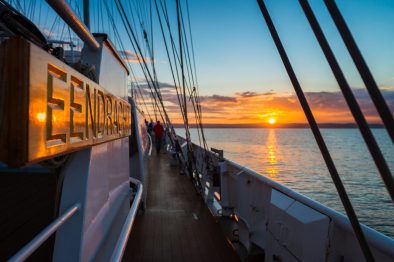 You sail on the Eendracht

Adventure, action and fun await on board of the largest three masted-schooner of the Netherlands! The Eendracht's focus is especially on youngsters, but anybody is welcome to sail along. Whatever you choose, you're always contributing to a good cause. The …