This is Where I Belong

Oosterschelde, 2013
Sailing from Maurituis to Australia 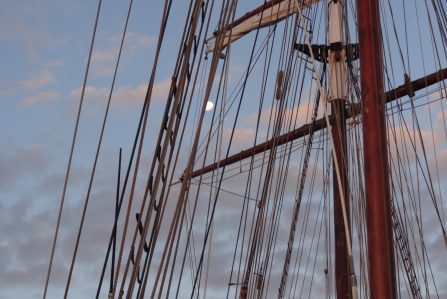 When I found out that you could still sail traditional ships I remember thinking:

a) this is probably a joke, and
b) why have I not done it yet?

I had experience sailing on yachts and dinghies but with an interest in naval history in the late 18th and early 19th century, I literally thought I had died and gone to some sort of nautical heaven.

My first trip on a Tall Ship was sailing from Mauritius to Australia on the three-masted topsail schooner Oosterschelde. I honestly will never forget that first night on board. We were coming out of Port Louis and heading towards La Reunion where we would stop for a day before heading out to sea. I remember being crowded round with fifteen strangers and at the age of eighteen, I was the youngest by far. The light was just fading, and the engine was chugging away as the land became a thick black wall in the darkness.

The Captain said, “Right, first of all, who would like to take the helm?” and my hand shot up in the air so fast the permanent crew all laughed.

I went bright red and mumbled something in response, trying not to draw attention to my ‘youthful’ eagerness. But my God was I excited! Following the Captain to the wheel I remember touching some of the ropes as I went. Almost for good luck, or even just trying to comprehend where I was and what I was doing.

As I stood next to the wheel the Captain started demonstrating how the ship reacted to the rudder, how she moved. I love the wheel of a Tall Ship. There’s something incredibly majestic about holding the spokes in your hand, feeling the weight as she turns or kicks back against the wind. As I took the wheel, the rest of the crew were being shown how to set the sails and slowly the sails dropped down. The Captain turned off the engine and apart from the odd bark of laughter, or scuffling from the crew amidships, it was a silent night. The Captain and First Mate stood next to me, all three of us calmly absorbing the view. We watched the sails as they were trimmed and felt the ship lurch as the wind started to take effect. It was blissful.

The most prominent part of that night was when the moon came out from behind the clouds. It was the type of moon that shone so bright it illuminated the deck and reflected in the water. From my position the moon was hidden behind the sails. They lit up and I could see the shadows of the masts and rigging. It was utterly glorious, as if nature suddenly had burst forth through everything. The whole scene was so ghostly, so mesmerizing and so singularly beautiful that tears came to my eyes, and I remember thinking to myself, “This is where I belong.”

We sailed on, under the light of the moon. 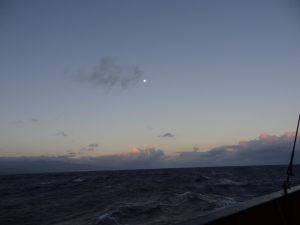 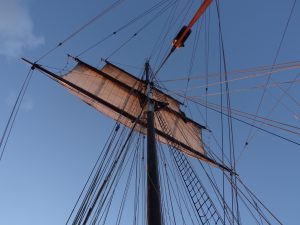 Join a sailing journey to live your own adventure!