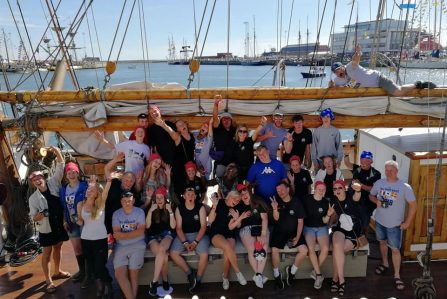 We woke up at 8 am British time, then at 8:15 am we gathered in the galley as breakfast was served.
Shortly after breakfast, during a minor briefing, we had a fire drill to test the pace (quickness) of everyone on board reaching safety, during which we were a little slow due to not knowing how to react. After that we took a short break whilst people were clearing away after breakfast.
Later that day we were put into our watch groups, where we were given 3 lessons about the vessel, which included: fire safety, life on board and how to react in case of an emergency, for example putting on life jackets and life suits.

We later had a short amount of time on shore at 11 am to go shopping and say goodbye to family and friends, then we returned at 12:45 pm and had lunch before leaving Sunderland. Soon after lunch we all gathered as we were asked to undertake some cleaning tasks on board to ensure that the vessel was clean ahead of our journey to Esbjerg, but suddenly plans changed as we had to disembark Sunderland sooner than expected to start the Parade of Sail.

After leaving Sunderland we hovered around the north sea as we were shown the ropes and the sails. From then on we set the sails and started The Tall Ships Race leg 1 from Sunderland to Esbjerg at 7:30 pm.

Preparing for Watch – After the start of the race me and most of the other trainees had the chance to eat dinner and take in the views of the evening sun. The horizon was full of the other ships; big and small. It was a great sight to see England’s coastline disappearing in to the evening haze and the open ocean in front of us with the other vessels jostling for position. After eating on deck I went to bed to try and catch up on sleep for the coming shift. In Cabin 2 it took me a long time to fall asleep due to the small noises from the kitchen and the creaking of the masts… however in the Skansen cabin right at the front of the boat Sara and the other girls on our watch slept well! =) From inside the Skansen you can hear the waves and water splashing on the hull of our vessel as it cuts through the water.

Watch Begins – 23:30. Our watch were woken up by the guys from the first shift. We got the details on the weather, sailing condition and time. Some of us got washed and then we mustered on the deck. We had a briefing with the shift before us. The weather was calm and it was an easy sailing which gave us a chance to talk to the captain about the racing. Right now the next watch team are being woken and we’re looking forward to go to bed.

Watch started at 3.30 British time we got up and struggled to get ready for our watch. We met up on the deck for 3.55 to have a briefing before we had a chance to have a cup of coffee before the fun begun. Once we were briefed and said hello and good luck to the previous watch we all met up on the middle of the deck and had a little bit of a chit chat about the history of the boat and about life on board. Then after that we had a little game to see if we could remember people’s names.

The best thing about it was to watch the sun rise and to see how it actually rises because we don’t get that experience back at home. It was interesting to realize we couldn’t see any land.

All around all we could see is other ships that are in the race; we found out that we were 3rd position from the captain before he went to sleep. As the light came up we could see more boats with their sails up.

We hope we can move up to 1st position, we still have 2-3 days to make this achievement. We’ll finish our shift and welcome the next watch to take over the duties in the morning sunlight. 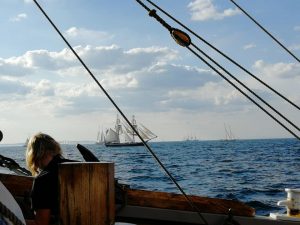 Early in the morning watch, we had to adjust the sails quite a bit. However as the crew was improvising a lot, they weren’t really able to tell us what was happening as they didn’t know either! This meant that we were essentially pulling ropes without knowing what they did, but it was good practice nonetheless. The
main thing that happened today was that the wind increased slightly! This meant that we could sail a little faster which was good for the race. However we did slip down the order to 6th position, but are now moving back up to 4th currently. At some point during the morning 8-12 shift the ship crossed the Greenwich Meridian, 0 degrees latitude.

Both our shifts today have included cleaning the ship free of salt, including the deck and all the varnished wood. Also, as the previous watch kindly did the dinner dishes, we haven’t had to do that!
But the big celebration today was for Felix’s birthday – we had a cake that Turid made specially. Additionally we found out that his father is the captain Ib, which none of us knew! We have also started a murder mystery game, where we all aim to ‘kill’ one of our crew mates and we will see who is still alive at the end of the voyage.

The weather has been sunny today, and we hope that the wind continues to be good so that we can keep
going fast!

We started our watch at 11.30 after being woken up by the previous watch, and had a traditional Swedish lunch which was a type of pea soup. We then washed all the dishes on deck which was followed by a game of Uno. Afterwards we sat and had a lesson all about the different sails on the boat and which ropes control each sail. We then met Luna, another Ship that was crossing our path, and we overtook them which now means we are in 3rd place.

We also spent a lot of time cleaning the boat and it was hard work as it was very hot. It has been a lovely
day and it was very calm with low winds but they have picked up throughout the day.

We had Pasta and Veggie Meatballs for our evening meal which tasted great! We then went to bed for a short nap before night watch began. On waking up, the wind has really picked up, we are now going a lot faster than we were. It is quite cold but we have been very lucky to see bio-luminescent plankton in the sea, which looks magical. 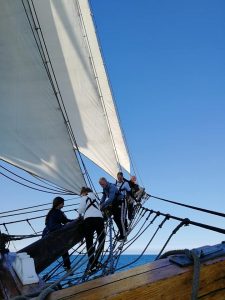 Working with sails on the bowsprit

We started our watch at 8 am. In our watch we had to clean the deck and the hatches. But before we cleaned the hatch, we had to scrub the fenders. After cleaning the deck, we did the dishes. Then we were split up in two teams. The one team had a theoretic lesson about the wind and the sails. We learned about how the sails catch the wind to move in the right direction. The other team went climbing in the bowsprit.

Our position in the race at that time were 5th.

The shift started off slowly and with the news that our current race position was 11th. As there was not a lot to do, we engaged in social activities where we ended up learning about each other’s jobs and what we
wanted to be doing in the future. Then we needed to “tack” and sail in a more northernly direction. We had a lovely start to the day’s sunrise with a display of beautiful colours making fantastic photo opportunities.

Nothing more to report on this shift.

We started the day off with making a maneuver to gain some wind, and get on the course towards the goal, it went well. After that, we began to do our daily routine. Clean the deck, and do the dishes. We then split up again, with some of the rest getting the ability to learn how to climb the bowsprit, with the rest of us doing our chores.

After that, it was time to relax. Most of us laid on the main hatch and took a nap. A while after, it was
time for frika, however, shortly after frika, we had to make another maneuver in order to be able to catch onto the wind, and go onto the right direction. So far, we have been zig-zagging our way to the goal, but that is the best way for us to get to our destination. Our general speed is 3.4 knots, and our position in the race now is 6th in our class, and 8th in general. So it’s a nice news after the dreadful downfall to 11th place before! 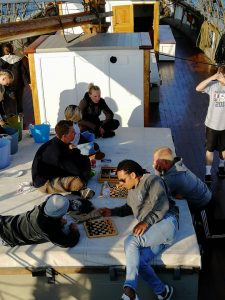 The weather has been a little on/off. At first it was chilly in the morning as to be expected, however, it got warmer, but not as warm as during the beginning of the race. It changed around the last part of the shift, and now it’s clouded and in the background, there is rain on its way. Hopefully, if the rain will reach us, it will give us a boost with wind and current, so we will go faster.

We also got some news from the HQ of The Tall Ships Races in Esbjerg, that we have to cross the finish line latest at 16:00 today! That means that we have around 4 and a half hours to finish the race. But we are doing good, and don’t feel like we have to be in a hurry… yet.

Nothing else to report on the watch. Good luck to the next.

All of the photos have been taken by the Mentor Riia Arffman.