Sail the English Channel and take part in a sailing festival. In this trip you will embark in the town of Brest in Brittany, France, and set course east towards Belgium. You will sail between the northern coast of France and south England before reaching Ostend just in time for the Oostende voor Anker festival. The Atyla will have an open Ship, and in turn you will get to visit many other vessels that will gather for the event. Open for all Windseekers, minimum age 15 years. Special price for the first 6 trainees no longer available.

Ostend (Oostende in Flemish) is a seaport and tourist destination on the Belgian coast. The original belle époque architecture was largely destroyed by two world wars, but the city still has plenty of worthwhile sights to see, such as the Mu.ZEE, the Petrus and Paulus church, and the fort Napolean. Visit one of the museums, check out the lively cultural agenda, and step in a Belgian tavern for a ‘pinteke’. And don’t forget the beach, which can be crowded in the summer! 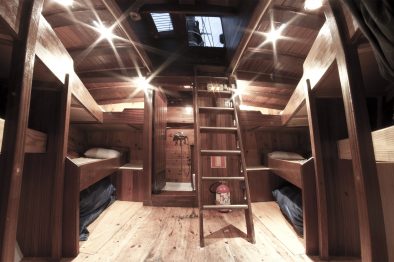 You sail on the Atyla

The Atyla is a true Spanish ship! She boasts the magnificent-looking, hand carved wooden elements, with the great entourage. To relax, enjoy the leather seating in the saloon where you can listen to the crew's stories from far-away seas. In …