No places available anymore – Tall Ships Races 2015 – Race 1 Belfast marks the start of the summer’s most challenging and fun adventure. Along with 75 sailing ships from around the world, the Sorlandet will fight to be first over the finish line. You will experience almost unbearable excitement from start to finish. The Sørlandet is a traditional full-rigged ship. Three masts. 27 sails with 1,200 square metres to catch the wind. Gain as much speed as possible. It takes hard work. Many eager hands to heave the ship’s mile-long ropes. Prenight of afternight possible. Price 70 EUR p.p.p.n. Open to all ages, minimum age 15 years.

Belfast is the capital and the largest city of Northern Ireland. It started out as a small hamlet with fertile land along the mouth of the Lagan. Soon, marauders and pirates realised Belfast’s lough was deep and their shores were the perfect haven for repairing sea ravaged ships. Today Belfast is a wonderful city to explore! Visit the Titanic quarter waterfront, the Ulster Museum, or the Odyssey area where you'll find lots of entertainment. And spend some time in one of Belfast's many pubs.

Ålesund is once again host port for The Tall Ships Races in 2015. Ålesund harboured the event for the first time in 2001, in an intimate harbour amongst beautiful fjords, mountains and islands. Consisting out of seven islands, Ålesund is a modern city. In 1904 the city, once built largely of wood, was completely burned down by a sea of flames. After a period of planning, the town was rebuilt in stone, brick, and mortar in Jugendstil. 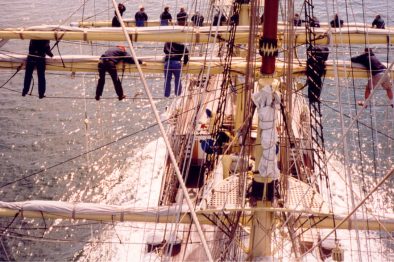 You sail on the Sorlandet

The bow of the Sorlandet cuts through the North-European waters at summertime. Since 1995 she regularly crosses the Atlantic Ocean on the way to far-away destinations, like the Caribbean. Sometimes the Ship is manned by the cadets of the Royal …