No places available anymore – Sail from Rostock to Sail Bremerhaven where the big Tall Ships will be moored in the harbor for Sail Bremerhaven. Open to all ages, minimum age 15 years.

Rostock is a large city on the Warnow River, and home to one of the oldest universities in the world. One of the most picturesque places in Rostock is the Neuer Markt (New Market Square), with the Town Hall - that was originally built in the 13th century in Brick Gothic style. The square also preserved six original, carefully restored gable houses from the 15th and 16th centuries. There are a lot more historical and cultural sights to see in this city. So go ahead, and explore!

Bremerhaven is one of the most important German ports, playing a crucial role in Germany's trade. The town was founded in 1827, but settlements in the vicinity were settled as early as the 12th century. The main attractions for tourists are found at the Havenwelten and include the German Emigration Center and the German Maritime Museum, featuring the Hansekogge, a vintage cog dating from 1380, excavated in Bremen in 1962, and the historical harbour with a number of museum ships. 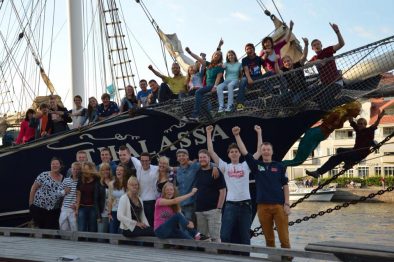 Sail in style. The Thalassa is more than capable to sail every imaginable sea and ocean. A 3-masted barquentine, she carries square sails on the foremast, while the main and mizzen masts are both gaff-rigged. Thanks to that she can …