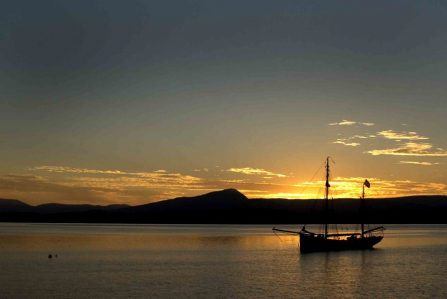 Finally, after two and a half days of motor sailing, we are able to carry on under sail alone. A bit later than expected, but still very welcome, the ESE-ly winds have filled our sails again. Progress has been good and it looks like we are going to beat the coming gale to Falmouth. So is the rest of the fleet. This morning we spotted the Iris at anchor on the north side of the Isle of Wight. At the same time the Eldorado was catching up with us from the east, with the Morgenster just a few miles ahead of us.

Now, of Starpoint, everyone is under sail again. We leave Dartmouth and Salcombe, two of the gems of Devon, behind us. In between the squalls, which are plentiful, the sky lights up bright with stars, making for a dramatic setting in the middle of the night. The winds are still very fickle – and so is our speed. We anxiously check the AIS to see what the rest of the fleet is doing. One ship is a cruise – two is a race… It is tempting to shake out the reefs and put some topsails on her. For now we can keep up.