We Learned How to Work Together While Setting Sails 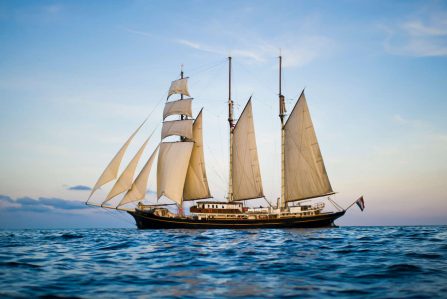 My name is Ola. I’m 15 years old and I come from Poland. It was a big pleasure for me to be a part of The Tall Ships Races 2018 on the Leg from Sunderland (England) to Esbjerg (Denmark). I was sailing on the Dutch vessel Gulden Leeuw.

The first thing our Captain Robert taught us, when we got on board, was how to properly pronounce the name of the ship. It sounds like Hulden Lu. Then the Captain explained to us the golden rule “safety first, don’t take any risks”, but later on we found out that the most important, unspoken rule is “don’t fall overboard”.

When I first stepped on the Gulden Leeuw, I didn’t know anybody. I was also the only one from Poland. But people there were amazing. So open minded and patient. On the first day I was shy and not really confident speaking English, when people around me were speaking Danish I was kindly waiting for them to start speaking English, but on the last day when they started speaking Danish I was like : “Hello! I’m here! And I don’t understand anything! Speak English!!! “

The biggest surprise for me was sleeping hall. Imagine 58 people sleeping in one big hall. I thought we would have huge queues to the bathrooms and bad smell from the boys‘ side, but it wasn’t that bad. On the first day I had a little chat with my mentor. “I’m gonna have a shower and then go to bed. I’m so tired.” “But remember! Only one minute.” And I was like “Yeah, hahaha of course. Nice joke.” Then I saw information on the bathroom door: “Please shower max 1 minute each person!!!!! Otherwise we will run out of water!!!!!”  And I knew it wasn’t a joke. At first I was a little bit scared I’m not gonna make it, but it wasn’t really that hard.

When we got acclimatized a little bit, the crew divided us into groups. Luckily I got in one watch with Sara. On the first night I took voluntary gangway watch with Helen. For me Helen was someone like the mother of our watch. She always took care of us, like waking us up to go on watch or explaining sailings problems. On this watch I got to know people better and made new friendships even easier than in daytime. People on gangway watch have to make sure the gangway is not damaging the vessel, and don’t let strangers get in.

We were starting the day at 7 o’clock eating breakfast. Our vessel was making cruise trips for people in the harbour so they could taste life at sea. On this few hours trip we, as a crew, learned how to work together while setting sails or trimming them. We quickly dropped our passengers off and in a big rush sailed to the start line, because there was a chance we weren’t gonna make it on time. Luckily we have started in the last minute and the race began.

In all five days, we had lovely weather. The wind was not so strong, maybe sometimes too weak, but the sun was shining all the time. It turned out that when we set all of the sails the Gulden Leeuw was sailing very gently. Only few people had sea sickness. The funny thing was that you could go to bed nearly lying on the wall and then woke up on the floor after the tack.

On the first day everybody was at breakfast at 7 am. On the last day only few people. After we got used to sailing life everybody started to live their own life. Always someone was sleeping off their night watch or having the watch or just chilling out. At 11 am was lunch and I can say one thing: I’ve never eaten such delicious dishes at sea. Everything tasted so good. After lunch we had something nicely called “happy hour”. We played some music on the speaker and started cleaning the boat. My phone played main role in it, because I had lots of pop songs downloaded on it.

When we finished cleaning there was “ All hands on deck”. We were divided into three groups based on our interests and would do same things like on our regular watches. So navigating the boat, trimming the sails, steering and being on a “lookout”.

At 6:30 pm there was dinner. And every day for dessert people from different country made their national sweets. They were also helping the cook. I will never forget the French girls making pancakes when they were throwing them into the air. On the Polish national dessert day the cook told me that I will help him make Kołaczki. And I was like: “What the heck is Kołaczki?” But after I saw the photo everything was clear. Because I was the only one from Poland I asked my two Danish friends to help me. It turned out really delicious and I’m sure I will try to cook Kołaczki myself at home.

The night watches. I didn’t find it really hard to wake up for them, especially when you know that a cup of hot coffee and a slice of bread with nutella are waiting for you. Something that is worth sailing are the stars. There is no other place you will see them so clear like at sea. For sure my favourite thing was navigating. Checking the position and making sure we are sailing in a correct direction. I was steering twice. If you want to sail the course you want, you have to be 100% concentrated. No talking or laughing.

In the competition our boat was 15th out of 24 I think. I’m not sure because it wasn’t the most important thing to me. The moment I enjoyed the most was when the Captain after finishing the race stopped the vessel and let us swim in the open sea! The water was so refreshing.

That was the journey I will never forget. I met so many nice people and made unbreakable friendships, not only with people from my boat! Definitely my English is better now and I’m feeling more comfortable to speak it. Thank you  for giving me the opportunity to be a part of such a great thing as The Tall Ship Races.

Join a youth sailing journey and have your own international adventure!