School at Sea Reunion Journey. Are you a former School at Sea student? Have your siblings ot children done the programme on board? This is the journey for anyone who would like to re-live their time on board, and for their loved-ones who want a taste of what it’s like. You will sail on board the Tall Ship for several days, from Germany to the Danish port where the Tall Ships Races start. Enjoy your time on board, getting back into the routine of sea watches, or finding out a little bit about the life of School at Sea student. Meet other alumni and their families, and spend a delightful several days out on the sea. Only for School at Sea former students and their family members aged 14 and older. The alumni may then continue on Thalassa or Wylde Swan for Tall Ships Race 1 Aalborg – Frederikstad.

Kiel is a German port town on the Baltic coast, widely known for its yearly ‘Kiel week’ – the biggest yearly regatta in the world! Many thousands of boats and ships of all kinds and eras take part in the parade. Kiel Week is also a festival, Volksfest and fair as well as a maritime event. But Kiel offers more: a slew of museums (zoological, geological, historical, fine art, industrial, and military museums), a city centre with relaxed atmosphere, and the water and shores of the Kieler Fjord.

The Tall Ships Races 2019 will be visiting the grand port of Aalborg. Aalborg has had a love affair with The Tall Ships Races since 1999, when the city hosted the event for the first time. Aalborg is situated at the Liim Fiord where it was founded by Vikings over 1000 years ago. Today Aalborg is a modern city with visible historic roots. Its theatres, symphony orchestra, performance venues, and museums, make Aalborg a great place to wind down after an exhilarating Sail adventure. 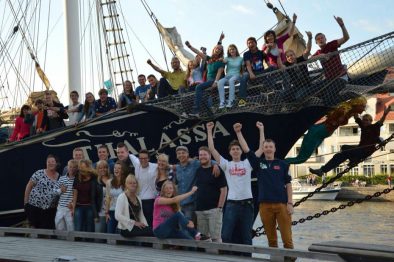 Race in style. The Baltic is the Thalassa's home ground, but this ship is more than capable to sail every imaginable sea. The 3-masted Tall Ship is super strong and seaworthy, and can sail up to 13 knots. In any …