Join the Wylde Swan in Bermuda and sail with the vessel to Halifax – Quebec – Montreal and end up in Hamilton in Canada. An amazing voyage of 25 days where you will sail at lest 1800 seamiles! Open to Windseekers of all ages, minimum age 15 years.

Hamilton is a port city in the Canadian Ontario province founded in the XIX century. The city boasts many attractions for you to enjoy. If history is your thing, visit the Canadian Warplane Heritage Museum or HMCS Haida museum ship. Contemplate art in one of the many galleries and museums or stroll through the Hess Street with its historic buildings and cobblestone road. 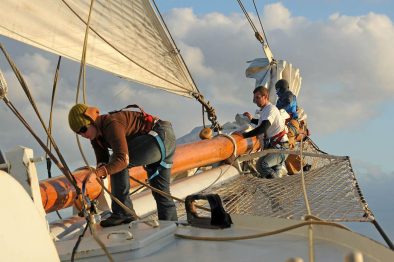 You sail on the Wylde Swan

As a topsail schooner, Wylde Swan has impressive fore-and-aft sails, with a couple of additional square sails on the foremast. That makes the ship both fast and great for Sail Training activities! The crew are well-trained professional sailors and volunteers, whose …