Join the ship on 4th August in Aalborg where the celebrations will be on their final night for the Tall Ships Races. The following morning the ship will set sail from Aalborg, with you as a trainee crew member assisting the permanent and volunteer crew to take the ship into the North Sea and down the north-west coast of Europe. We hope to make stops along the way, but this will be decided by the captain and crew closer to the time. You will enter the English Channel and sail along the south coast of England before arriving in TS Pelican’s home-port around 14th August, ready to disembark there on 15th August. Open to all ages, minimum age 16 years.

The final leg of the Tall Ships Races 2015 will finish in the grand port of Aalborg. Aalborg has had a love affair with The Tall Ships Races since 1999, when the city hosted the event for the first time. Aalborg is situated at the Liim Fiord where it was founded by Vikings over 1000 years ago. Today Aalborg is a modern city with visible historic roots. Its theatres, symphony orchestra, performance venues, and museums, make Aalborg a great place to wind down after an exhilarating Sail adventure.

Weymouth is a state-of-the-art centre for water sports, and played host to the sailing regattas of the 2012 Olympic games. The town is a popular seaside spot with a nice beach, even though some of it is rather kitschy. Weymouth has just about the sunniest climate of the United Kingdom, further contributing to the town’s holiday feel. Weymouth is great for windsurfing, kitesurfing, diving and sailing. If you want to stretch your legs, the surrounding countryside offers many options for a hike. 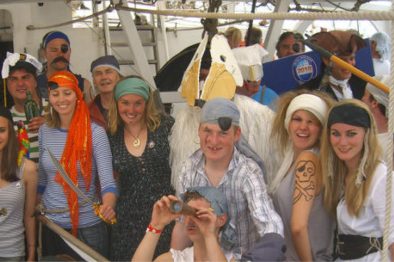 You sail on the Pelican of London

Since her maiden voyage in 2007, TS Pelican has completed Transatlantic voyages and participated in the International Tall Ships Races where she has a reputation for being very competitive. With her 45m and combined square rig the Pelican of London …