* Places at request * Join the clipper Stad Amsterdam in the German port of Hamburg and get to know the crew. The next morning you will sail out and set course for Travemunde on the Baltic Sea. In order to reach your destination you will sail around Denmark and past its northernmost point Skagen, where the North Sea and Baltic meet. Then you will continue south along the Danish coast. This trip is short but filled with adventure and a perfect way to see how it is to sail on a real Tall Ship. Open for all ages, minimum age 15 years.

Travemünde, on the shores of the Trave river near the Baltic Sea, is an important ferry port and sea resort. Its lighthouse is the oldest in Germany, and its port organises the yearly Travemünder Woche sailing contests and the Sand World sand sculpting festival. Take a walk around this relaxed town, have a nice meal, and spend some time on the beach if it’s a nice day. If you’re up for a hike, you’ll find the Palinger Heide close by. The nearby town of Lübeck is also well worth a visit. 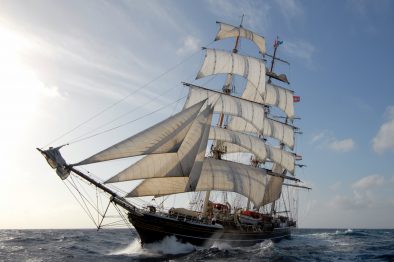 You sail on the Stad Amsterdam

A modern Clipper. Imagine yourself on a 19th century clipper when you board Stad Amsterdam, a modern version of the fast merchant ships of bygone days. The 60 metre long wooden deck, the high masts, the many yards and hundreds …