Expedition Horizon: full experience. Let the Twister take you on an unfrgettable sailing adventure with sustainability theme. Board the ship in St. Martin and cross to Bermuda before setting course for Europe. Enjoy the relaxed sailing in the tropics and then take on the challenge of crossing the Atlantic under sails via the remote Azores. Spend 43 days on board, learning to sail a traditional vessel. Set the sails, steer, navigate; fish and cook; relax. Fish for microplastics in the ocean and participate in global research with By the Ocean we Unite. Give yourself over to the adventure and enjoy the digital detox, out of mobile service for many days at a time. Become one with nature and find yourself again. Open to Windseekers aged 17+.

Saint Martin is a Caribbean island, divided into a Dutch part and a French part. Its warm climate will help you adjust to the pace of life on the island, but if you want to do more than sip piña coladas, you’ll find plenty to do. Visit the old fort St. Louis, overlooking Marigot bay, the French Quarter (Orleans), and Paradise Peak. Or stand at Princess Juliana Airport where you can nearly touch the planes as they fly over you. Discover the beautiful beaches of Simpson Bay and swim in the ocean. 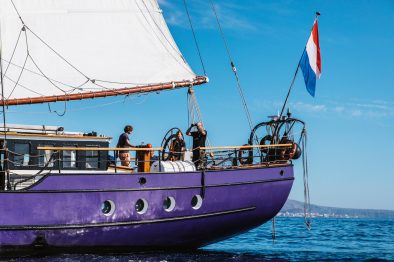 You sail on the Twister

The Twister was built in 1902 and renovated in 2012 in order to provide all the new safety features and modern comfort. These days she is a very fast and reliable sailing vessel. The modern rigging system and  gracefully designed …